Watching cartoons in French can be an excellent way for your child to practice their listening skills. They get exposed to new French vocabulary, in context, and learn how the words are pronounced and used in practical sentences. My daughter’s absolute favourite French cartoon for kids at the moment is TroTro or L’Âne TroTro. Based on a series of books by Bénédicte Guettier, it follows a donkey named TroTro and explores themes such as feelings, childhood games, and daily routines, making the show a great choice for early learning.

There are a number of French-language cartoon options available for your tout-petits online. While there are many excellent translated cartoons, original French cartoons present some unique benefits for our mini French learners.

We always referred to my daughter’s teddy bear as ourson since she was familiar with that word from the book Bonne nuit, je t’aime! by Caroline Jayne Church. Lately, however, I noticed that she prefers calling her teddy “nounours” after hearing TroTro use that word.

French cartoons for kids are great for teaching children a variety of words related to childhood. Some other examples of words she picked up are:

Insights into French culture and humour

Cartoons like TroTro give viewers a glimpse into French culture and humour. In addition to learning new words, including baby talk, children discover French cultural traditions such as le goûter, a small afternoon meal that involves a sweet treat eaten between lunch and dinner.

What I love about TroTro as a parent

The episodes are short

Each episode of L’Âne TroTro is about 3 to 4 minutes, which is great for the attention span of younger children. Depending on how much screen time your child is allowed, parents can choose one clip or more.

Since the show is all about how TroTro and his friends have fun in their day-to-day, I’ve noticed that Surya will often start mimicking the scenarios she’s seen using items that are available to her in her room or around the house. I’ve seen her play on her own for a good 15 to 20 minutes building a cabane (fort) with blankets or jumping around in her sac à patate (potato sac) pretending to be participating in a race.

TroTro learns from his mistakes

TroTro is not perfect. He is a little mischievous and often makes mistakes, but he has a great attitude and treats them as a source of discovery and wonder.

There are a few things I don’t like about the show, though. There are certain episodes and interactions between the characters that I find reinforce sexist notions. For instance, I’m not a fan of the episode where TroTro asks his parents to teach him how to dance in order to get Nana, the girl he likes, to notice him. Or, the one where he wants to give Nana a gift and his dad tells him that girls like flowers. But then again, I’ve noticed instances of sexism in Peppa Pig too, like the time Papa Pig refuses to wear a pink shirt or when Peppa tells George that the scarecrow wouldn’t want to wear a dress.

But overall, TroTro a show that brings a lot of joy to my little one and I do recommend giving it a shot.

What is your favourite French cartoon for kids? 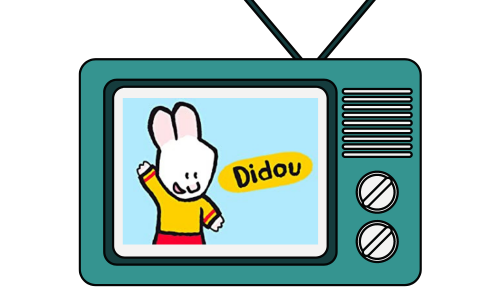 One thought on “French cartoon for kids: TroTro (L’Âne TroTro)”